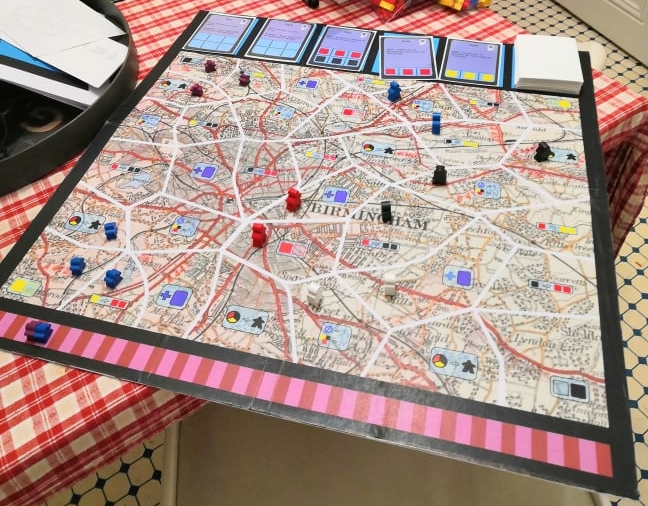 On August 8, 2019, with nothing to do on that hot summer day, I turned on my computer, went to the fridge for a glass of cold tea and watched the first episode of the first Peaky Blinders season. A week later I was looking forward to the fifth season. This series is not perfect but an incredible atmosphere emerges from it. A single camera shot is enough to immerse us in the heart of Birmingham at the beginning of the 20th century. The strength of this universe made me want to imagine a board game.

Birmingham is a board game where you play as a gang that is active in the city. The goal is to gain influence points. To do this, it is necessary to carry out missions. They may ask you to pay for resources or to conquer new districts. In Birmingham players must skillfully deploy their henchmen in their own districts to recover resources, recruit new supporters, trade or protect themselves from adverse attacks.

At the beginning of each round the players take all the pawns they have on the board except one per quarter. During their turn they will be able to redeploy their checkers. When a player places a pawn on a district that already contains a pawn belonging to him then he can activate the effect of the district. Districts have various effects: resource production, trade, pawn production... Players can also place a pawn in a district that does not belong to them. In this case a fight is triggered. Birmingham looks like a Risk where territories are useful. So it is both a game of conquest and management.

One of the particularities of this game is that at the end of each round the players can choose a new mission. Each player in turn will move their counter indicating the mission of their choice. When a mission is accomplished it is defeated. Missions are visible to everyone at all times and players can easily change missions (only at the end of a turn) even if they have not finished their previous mission.

The point I would like to develop is the possibility of doing missions in pairs. Indeed, some missions require that more than one player has selected it in order to be accomplished. There are therefore 2 types of missions, those that can only be done solo and those that can only be done in pairs. The duo ones earn more influence points and other bonuses to a player than the solo ones. In addition, players who are on the same mission cannot attack each other. This last point is extremely interesting, I think. I have found a way to use missions to allow players to create temporary alliances. Thus, this phase of the game becomes highly strategic because in addition to choosing a mission, players can benefit from peace treaties.

I think that in board games, but also in video games, it is very important to know how to reuse gameplay elements that have already been implemented. It is not necessary to do it at all costs but using the same support for different purposes is often very interesting. This saves resources. This economy serves the creators of the game because a pawn to produce or a mechanic to develop less is always interesting. It also serves the players because by reducing the weight of the gameplay elements, it makes the whole thing more readable and less loaded.